How to Write an Advert I: Image and Headline

The image and the headline are the two most important components of an online adverts. I'll get you up to speed on the tactics you need to know. 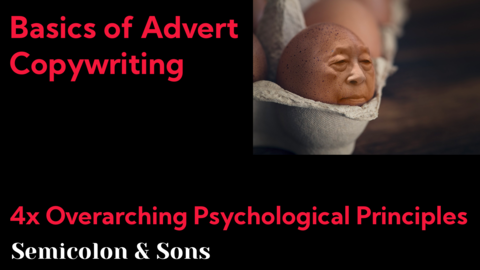 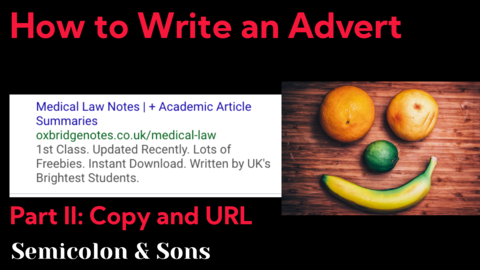 So I have some experience with creating online adverts.

In Facebook alone, I've made about 2663 adverts over the last few years and you’re looking at just a selection of them here.

I'd like to talk about what I've learned by creating so many ads and comparing their effectiveness over the years.

The most important element in any online advertisement as far as I can see is the image.

The image serves two purposes. The first is that it has to attract the users' attention on the screen.

There are many elements on the screen that are going to be competing for that user's attention, your image has to have enough contrast and visual interest in order to attract their gaze right over to your advertisement.

The second purpose of the image is to do some actual selling. This means it should tie into the psychological principles we looked at last week, and thereby create some demand for your product.

Now I'm going to focus on the first aspect; that of creating sufficient visual interest.

Let's consider things from a physical or biological attentional perspective.

So here we have part of the Facebook website and you can see it has the well known blue branding.

Now, imagine that you created an advert like this one that uses those same shades of blue, wouldn't you imagine that this would barely stand out on the Facebook page, and therefore this advert would get much less attention.

In general, be aware of contrast and how it affects the human ability to perceive information.

As you can see, setting some colors against the background of another color in this particular example, makes it either much easier or much more difficult to read the text.

The same effect applies in your adverts, so be aware of that.

Something else that always gets attention in images is just putting a human being there, someone looking right at the camera.

Some adverts include directional cues, like arrows, which have the effect of drawing the eye’s attention towards whatever the arrow is pointing at.

In this particular advert, I think it's done a bit haphazardly. If I were to do it, I'd probably point the arrows at the benefit or the headline text, etc.

Novelty is another thing that's sure to grab someone's attention.

Our brains are wired to look for things that stand out, and if you go to Photoshop and you create something exotic like Heinz have done in this advert, then you're likely to get more attention, and it also opens up the possibility of creating new sorts of symbolism that help in establishing the benefits of your product.

My most successful image tactic of all time -and I say this after having pitted hundreds if not more images against one another on platforms like Facebook- was to use novelty, in particular, anthropomorphic novelty.

These are some images that performed extremely well for me. And yeah, they are just odd, and bear in mind that I was selling law notes with these images.

The images really have nothing to do with law notes, the reason I use the images was just to grab enough visual attention, such that the user on the advertising platform will then read my headline, which would clearly indicate that it's about law notes.

In all my time using weird images like these, not a single person mentioned that the advert image was weird or that it had no connection with law notes.

I worried about that for a while, but It ended up not mattering at all.

I'd like to share a couple more images I was using, so you can get some ideas.

Here are some terrified green peppers. Here's a cat that's sort of growling, I think, or roaring. Here is a contact lens case with massive eyes. Here's a dog with some birds that have landed on its head. Here is a smiling cup of coffee. Well yeah, I think you get the idea.

Moving on to the second purpose of images in advertising, that of enticing the user to consider buying your product.

In this particular image for Dettol, it makes something that's invisible -germs- very visible and tangible, by taking some poetic license.

This makes people feel some fear of germs, and therefore, realize the value of the product in a way they mightn’t have otherwise.

This advert for the Hijet van promises the benefit of sexual companionship, quite vividly by filling the van with young women having fun.

It would be probably very unconvincing for the advert to just make that claim, but when they actually depict women in the van, it becomes a little bit more credible.

Say, if an advertiser wanted to communicate with their advertisements that using their product will make you part of some aspirational social group, that you will belong, then they're better off showing an image of someone from that group.

Showing what kind of clothes they wear, what body language they have, what setting they find themselves in.

Trying to do this with mere words would be a pointless task, you would never capture the richness in a couple of sentences.

At the same time, sometimes your image needn't be anything fancy or symbolic.

In remarketing ads where, for example, amazon.com might show you a picture of some product you were recently browsing. It's more than sufficient just to show that particular product because this will trigger your memory and perhaps get you to revisit the site and buy that thing.

This is a good thing from an implementation point of view because you'll probably be creating these remarketing ads via an API connected to your storefront.

Now I'm going to move on to the headline, which is probably the most important part of a written advert after the image.

In general, the headline is just an application of the psychological principles like, benefits and scarcity, that I went over in the previous episode.

However, there are a couple of headlines specific pointers I'd like to show you right now.

The first is a pointer as to what not to do.

A lot of people who are new to advertisements end up using their business name inside the headline.

This is particularly common with agencies, law firms, accounting firms, that kind of thing.

The thing is, unless you have a stellar existing reputation, no one really cares about the name of your business.

Imagine you've been served notice to appear before the police tomorrow morning. In that case, there are no sweeter words in a headline than 'we are experts in representing you to police at short notice'.

So the first thing to do when writing a headline is to keep in mind that the headline is about your customers and their problems, not you and your business.

Another strategy that I found to be very, very helpful when writing headlines that get clicks is to specifically identify and call out your target reader, your target advertisee within the headline.

For example, in Oxbridge Notes, when I wanted to reach law students, some of my headlines literally said, 'Hey, are you a law student?' or 'Do you have law notes?'.

The big idea here is to signal, loud and clear, via your headline that this ad is gonna be worth their time.

You see, so many people advertising on Facebook or other platforms don't do targeting very well, or they do targeting very very broadly, therefore, the vast majority of adverts that people end up seeing on these platforms are completely irrelevant to their interests.

If your ad is well targeted, you should probably specify that within the headline. Just go the extra mile and tell the person seeing the advert that yeah, this really is for you. I wasn't messing around when I chose to target you or the class of people you're in.

Lastly, from a pragmatic point of view, you might be constrained in what you can put in your headline, in the sense that many platforms, such as Google AdWords, will bold keywords within the headline when they match the search query, and that can give you a click-through rate advantage.

That's all for now.