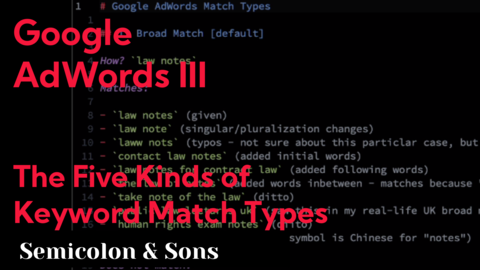 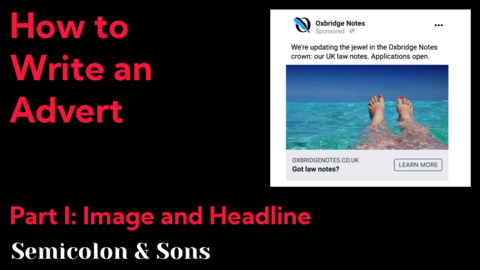 How to Write an Advert I: Image and Headline

Today, we're going to figure out how to make our advertising more tantalizing.

We'll do this by looking at 20 or 30 real-life advertisements and analyzing the psychological principles that were used in order to come up with the headline text and image.

You'll be able to apply this stuff, not only to your advertising, but also to your on-site copywriting, to your email marketing, and even in your personal life.

These principles are so deep that they go beyond psychological and perhaps even to biological.

I'm going to start by delineating a couple of big hand-wavy psychological principles that are useful in all sorts of advertising copywriting.

I'm going to draw heavily on an excellent but terribly named book called 'Cashvertising' which you see here.

Really recommend you read this and I also recommend that you read it on Kindle so no one has to see that cover.

The first of these big overarching principles is that your copy should address benefits, it should talk about the deep psychological needs of your consumers.

The first of these is survival.

All of us are scared of death and this is a psychological need that we all have.

The next is freedom from fear, pain, and danger, and this advertisement here appeals to those fears.

The next is enjoyment of food and beverages, that's something shared by all of us in the human race.

Next is sexual companionship, this is used a hell of a lot in advertisements.

Next is that we all value comfortable living conditions, we want to have nice surroundings and to feel good.

The next need is to feel superior, to feel that you're winning or that you're keeping up with the Joneses.

The next need, the seventh one here is care and protection of loved ones.

And the last is social approval, fitting in.

Let me give you an example of how framing things in terms of these deeper psychological needs can make an advertisement better or copywriting better.

So there was a study done where there were these books, for example, 'The Fleece Of Gold', with generic sort of names and the sales weren't that good, I think this was getting 6000 copies per year.

And then the book was renamed to -see the subtitle here- 'The Quest for a Blonde Mistress', and this appeals to the underlying need of sexual companionship and sure enough the sales skyrocketed from 6000 to 50,000 copies per year.

It's important not to confuse features with benefits or proximate benefits with deep benefits in line with the underlying psychological needs I just went over.

The feature might be that the car has so and so many horsepower, can accelerate at. the speed... whatever, but the underlying benefit is perhaps that you have more status, or that you're more attractive to sexual mates.

And these underlying benefits are often between the lines, they’re often communicated implicitly with things like imagery as you can see in this very obvious advertisement here.

Let me put this all into context by telling you a story from my own business Oxbridge Notes.

So basically I have a marketplace where I sell notes written by top students, students at Oxford or Cambridge.

I found that when recruiting these authors from elite universities, money is not the biggest motivator.

I believe that many of them are from wealthy families, plus they also have high-paying summer jobs so it's not that big a deal, but what motivates them more is being respected for their intelligence, for being superior.

Therefore I set up a lot of my notes acquisition copy and advertisements to conjure up the image of academic excellence and so on, and to make it very clear that this is about finding the cream of the crop.

I found this approach to be much more effective, to resonate better with my target audience.

For example, imagine you're advertising food from a health angle. You might believe that vitamin C content is unimportant, because maybe you think that most people get enough of that in their diet anyway.

But what if your market sees vitamin C as critical, then from an advertising point of view, you're probably better off mentioning the vitamin C since that's the benefit that they want to hear about.

Anyone can promise to fulfill someone's needs, to provide them benefits, and in fact, many companies do exactly that.

So, how do we, as consumers of advertisements, filter out the fakes?

The flip side of this is, how do you as an advertiser convince people that you are credible, that you are the real deal.

A common way to establish credibility is by using imagery and symbols that are usually associated with trusted people and entities.

For example, you might depict members of your service business wearing suits or next to an American flag or inside a courtroom, all these being prestigious symbols and institutions.

For example, I know that some companies in Germany, some people who produce meat, send their meat over to Italy for some sort of processing, just so they can say 'Made in Italy' because that connotes a higher quality.

In fact, even the colors you use can indicate your qualities.

Here you see an ad for the Tesla, and the white color communicates cleanness and simplicity.

A tactic that's very common online is for a product to associate themselves with well-known retailers and distributors, where that product is available.

I was looking up, I think some sort of headphones here, and then on their manufacturer's website you see all these retailers’ names, and then you kind of trust these institutions, and therefore that trust carries over a little bit to this particular product.

Similarly, many startup websites and so on, list all the newspapers or online blogs and publications that mentioned them, or even just other companies that they are friends with, whatever that means.

Even better, is when some sort of arbiter publication, one that sifts through and reviews various products, picks your product as being the best.

That's obviously information you want to use in your copy, Wirecutter here review different electronic products.

In some industries, for example sporting wear, the credibility is established by them paying for shoutouts, celebrity endorsements, that kind of thing.

This is very common in general with the whole influencer scene, if you're able to do it, it's really great to appeal to some sort of authoritative source.

Out of necessity in our complex world, people use authorities as mental shortcuts, in order to avoid thinking through things for themselves.

For example, if there are independent resources or studies that demonstrate the effectiveness of this kind of light therapy lamp, then that's a very powerful argument to use in copy.

Another way to establish credibility is via the bandwagon effect -via social proof- suggesting that everyone else is doing it.

So the Walgreens advertisement uses this approach by saying that it's the pharmacy that America trusts.

Credibility via the bandwagon effect can also be established by demonstrating that some sort of aspirational group prefers your product.

Here we have a pretty ridiculous example. This is the old Camel ads, they claimed that doctors preferred camel cigarettes.

And then we have a completely different style of beer ad, for non-alcoholic beer, and this is showing some people who like the outdoors and they're into fitness -a different sort of aspirational Group.

A final tactic in establishing credibility is that length implies strength.

So here we have a testimonials page from Hey.com, and if I scroll down here you see that there is an absolutely huge number of positive testimonials.

This is quite convincing, even if you don't end up reading many of the testimonials.

The third overarching principle in copywriting is specificity or concreteness.

That means that instead of saying that you have a great safety record, you might instead say, '10,000 patients successfully treated, without any incident'.

I don't know if those figures are realistic by the way.

In my own business selling law notes, I don't simply advertise that I sell low notes, instead, I say that we sell case summaries, we sell academic summaries, we sell essay plans, problem question frameworks, all that kind of stuff.

And this gets people's imaginations going because they can actually visualize all these different things, and therefore your product has a larger place in their imagination and mind.

A last note on this idea of specificity is that some advertisements tell a story.

You can see this advertisement tells a story about a particular Volvo owner.

This is rather long, I could imagine you could do something in far less words today on Facebook or whatever, perhaps with an image carousel.

The fourth and last big overarching principle for copywriting that I'm going to cover is fear and related scarcity.

Fear can be a little bit distasteful to pull off so usually, you should combine it with a bit of humor.

Now I've moved on to scarcity, which in many ways is a cousin of fear, in the sense that the advertiser creates some sort of fear of missing out on a limited offer of some sort, and then the person seeing the advertisement, getting a bit worried about that.

Using scarcity in copywriting is highly effective, especially when the person seeing the advertisement sort of plans to buy it anyway but doesn't really get round to doing it now.

As soon as some scarcity is created, then that person has an incentive to make the purchase immediately.

That's in contrast to planning to purchase it later but in reality, forgetting to do it and never actually buying it at all.

I'm going to demonstrate a couple of different varieties of scarcity used in advertising now.

These first two, this one and the following one, demonstrate time limited price, a certain type of scarcity.

This next one here demonstrates scarcity related to a product line. The McRib, which is about to be closed off, if you don't try it now, then you'll never get the chance.

This next example of scarcity from amazon.com, is that there's a limited amount left in stock, and it's running out, and this creates some sort of pressure to take action immediately.

There's also elements of social proof here since if other people are buying this product because it's running out of stock, this means that you can have more confidence that it's something worth having because these other people have made independent decisions that they want to own this particular product.

In the world of restaurants, scarcity might appear in the form of being able to say that your restaurant is fully booked out two weeks in advance, so you need to reserve if you want to get a table even then.

That's all for now.