Learn all about how advertisers use everything from capitalization, to emojis, to numerical characters to win attention. And then learn about the importance of 'keeping the scent' and of having clean display URLs. 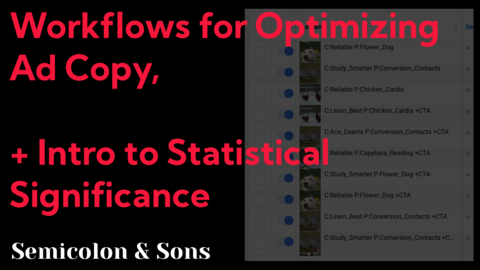 Workflows for Optimizing Ad Copy, and Intro to Statistical Significance

Today, I'll continue sharing my tips for writing the main four elements of an online advertisement, based on my experience creating thousands of them.

In particular, we’ll focus on the main copy and the URL. These are not just simple tricks to get clicks, these are deep principles that are going to take you a long way.

Let's move on to discussing the advertisement body.

So the most important thing here is to apply the psychological principles I talked about in the previous episode, such as connecting things to these deep down, ultimate needs that people have.

Space comes at a premium in online advertisements, so you should be really economical with your words and try to cram as many benefits as you can into this small space provided.

Here's one of my ads, you can see that I've got multiple benefits listed here: '1st class. Updated recently. Lots of Freebies. Instant download. Written by UK’s Brightest Students'.

In some cases, it can be okay to sacrifice normal grammar and spelling so as to fit more benefits into your copy text.

You can be the judge of whether that's appropriate in your particular market.

Another thing you can do in your copywriting is to compare yourself to your competitors, sometimes you can just compare your features to theirs but other times you can be playful, like this advertisement from BMW here.

There is also the possibility to compare yourself against some sort of generic product, rather than mentioning some particular competitor by name. This might be useful if you're worried about legal action.

And another possibility, again, is to compare yourself against your previous version of your product. This is something that Apple does very very often.

Another thing that's very commonly done in copywriting, is to take the possible objections that someone might have about your product, and then directly counter them.

For example, if someone is buying a router from you, they might be scared of it being very difficult to configure.

So in your advertisements, you might say, 'plug in and surf, no config needed'. Or with another type of product, people might be worried about it taking too long to arrive, so you can reassure them by saying, 'no waiting around, next day’s delivery'.

And a final example, someone might be worried about there being hidden fees to your product, so in that case, you can say 'no hidden fees, we never bill you more than we quote'.

Another copywriting idea for you to consider is to just include some numbers within your text.

Numbers grab people's attention in ways that words don't, and this may just be because they stand out from letters.

You get the picture.

Relatedly, emojis tend to stand out in advertisements quite a lot, and they're generally known to improve conversion rates, so that's something you should consider.

This next tactic is very very small scale, and it entails just capitalizing every word within your ad or every kind of major word.

This tends to increase conversion rates, I don't really know why, but it's been a thing for a long time.

You should end your advert with some sort of call to action. This is basically an imperative verb, like "Book Now", or "Call Now" or "Contact Us" or "Sign Up", or "Play Game" or "Watch Video".

This has such a large effect on conversion rates that many advertising platforms automatically include some call to action options within a drop-down menu, just to guarantee that you put one in your ad.

The fact that this works also really surprises me. It's almost as if you're suggesting something for them to do, a type of hypnosis.

Lastly, you should try to adapt the style of your text to however people write on the platform of your choice.

For example, if you're advertising on Reddit, things tend to be very very conversational, and you want your advertisement to blend into the kind of threads that people on Reddit would create organically.

This particular advert doesn't do it very well since it uses sort of generic text. This advert from Microsoft is much better since it starts with ‘Hey Reddit’.

This ad, one of mine uses a similar sort of tactic.

When you create a direct marketing advert, it's going to lead somewhere when someone clicks on that particular advert.

That ad you just saw leads to this page on my website.

You can see over here that I've set the utmsource to Facebook, utmmedium to CPC, utmterm to RM + law + visitors, and utmcampaign to UK +law +authors+ 2017.

This allows me to filter the data within Google Analytics and analyze how well the advert performed vis-a-vis triggering actual sales.

By the way, I cover these fundamentals in great detail in one of my previous episodes.

As a short reminder, if I go into Google Analytics, and then go under Acquisition> Campaigns > All Campaigns for example, and choose ‘e-commerce’, then I can see all the different campaigns corresponding to the UTM tags I set with those values.

And then I get these extra useful data, for example, the number of transactions, the average order value, the e-commerce conversion rate for each of those campaigns, and critically the per-session value.

Trying to run online advertisements without this sort of extra information is really really stupid.

By the way, just to save you some trouble, you do not need to do UTM tagging when you're using Google AdWords. That's because Google AdWords has excellent integration with Google Analytics, but for other platforms, you're probably going to have to do this.

On that note, I'd like to discuss the difference between regular URLs, where the user actually gets led to on your website and display URLs.

A display URL is basically a short and pretty version of your URL.

You can see over here for this photo advertisement that their display URL is this thing over here.

In actual fact though, when I hovered over this particular advertisement link, the real URL was much longer and had UTM tracking parameters, as well as a bunch of extra metadata and IDs, that kind of thing.

All that stuff looks really ugly and frankly kind of scary within a URL, therefore, online advertising platforms allow you to display a short and simpler URL.

This shorter and simpler URL doesn't necessarily have to link to anything on your website, it's just there to look pretty and to communicate what the web page is about. But it’s probably a good idea for it to actually link to something useful, just in case someone copies and pastes that display URL or wants to type it directly into the browser.

The last concept I'd like to introduce with respect to URLs and your advertisement is the idea of 'keeping the scent'.

The idea here is that your advertisement may use certain imagery or certain promises.

This creates an expectation in the users' mind, and when they click through to your website, the page they land on should probably also have that same look and feel, or also bring up those same benefits.

What you really don't want to be doing is have an advertisement for one thing, and then link to a page that seems to have nothing to do with that advertisement.

This throws people off and causes them to bounce quickly, and this, in turn, causes your advertisement budget to be wasted.

The key idea to keep in mind is that the users know nothing about you and they cannot read your mind, even if the link between what you say in your advertisement and what's on your website is obvious to you, it mightn’t be to them.

This example from high rise does things extremely well with respect to keeping the scent.

So, users see this display advert, and then when they click on it, they arrive on this webpage, which is basically just an expanded version of that display advert.

It has an image of the same person, it has the same quote, the color scheme is the same, there could be no doubt in that person's mind that they arrived to the right place.

The need to keep the scent is one of the many reasons why online marketers tend to create legions of landing pages.

It's definitely not the biggest reason though, the biggest reason is probably because certain advertising platforms -maybe all of them at this stage- have a concept like quality score, which measures the extent to which the keywords within your advert match up with what's on your website.

When there’s a good match, the advertising platform makes your advertisements significantly cheaper.

Let's look at an example where the scent is truly lost.

So, this comes from a blog post, cxl.com and they bring up this example here. There was an advert with the headline 'Start Your Own Business'.

So imagine you want to start your own business, you click through and then you arrive on a website about startup weekend with a headline 'What is Startup Weekend?'.

This seems to have nothing to do with the advert you just looked at. So you probably press back, due to there being a complete disconnect.

That's all I've got for today.