Today we use various Google Analytics reports to answer some critical marketing questions: 1) Should you do remarketing (with reference to the Audience/Behavior/New vs. Returning Users report); 2) What countries should you focus your marketing efforts in (using the Audience/Geo/Location report)? 3) How should you adjust advertising bids for mobile vs. desktop visitors (if at all)? 4) Are there any statistical signs that the website is broken on some browsers (answered with the Audience/Technology/Browser & OS report combined with ecommerce data) 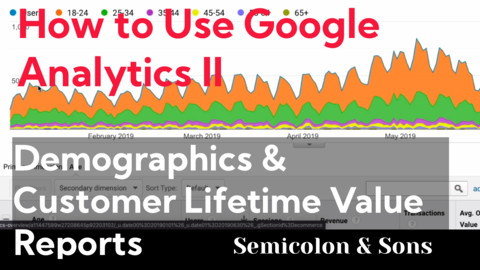 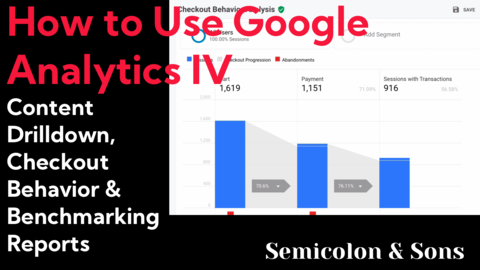 This is my third video about Google Analytics, and today I'm going to demonstrate a couple more critical workflows in order for you to better understand how to market your website.

And finally, I'm going to show you how to compare your performance across various browsers. This can reveal technical problems with your website.

An important metric to think about in your online marketing is the relative value of new versus returning users. And that's what this particular report is useful for. You can find it under Audience > Behavior > New vs Returning.

So first off, why might this information be important?

You can also send emails out to your existing customers If returning users happen to be worth more or significantly more than new users, therefore you're justified in bidding much more in that sort of online advertising.

Before we look at actual data, let me also specify something here. A user is defined as returning in Google Analytics based on Google Analytics not being able to find whatever cookie it leaves on the user's browser.

So, therefore, it doesn't have a perfect picture of whether a user is actually new or returning. It does the best it can.

In reality there are probably more returning visitors because of the limitation I talked about before - you know someone could just use a different browser, for example.

And let's look over here at the per-session value.

It's 7 cent for a new visitor, whereas it’s 25 cents for a returning visitor, i.e. it's worth about three-and-a-half times as much, therefore I would bid far more in a remarketing online advertising campaign based on this information.

Even though the internet is a global phenomenon, there are often reasons why you might only want to market to people in a certain country.

Anyway, let me tell you a story.

So I've actually switched over here to the Semicolon&Sons website.

I did a small bout of online advertising to see if I could get more subscribers, and I just started advertising and I was getting incredibly cheap results like one cent per click. I even bragged about it online. And then people were kind of doubting that I could have gotten such good results, and they were right to doubt it and I'll show you why via this Google Analytics report.

And if I scroll down here I see a map of the world, and then I can see which country - this is the period when I was advertising - which countries gave me the most results.

And India with 73%, Egypt with 5%, United States with 2%, this mightn't have even been from the online advertising at all, then a bunch of other countries with quite low GDPs.

And this is problematic because these people are unlikely to be able to afford the prices I want to charge for my pro subscription. Therefore, it doesn't make sense to spend money on getting users from those countries. They're welcome to watch whatever they want on YouTube and so on but from the business perspective of spending money, it doesn't make sense for me.

And this is kind of an overall truth, a general truth with online advertising platforms that if you don't specifically tell them that you don't want, you know, other countries or other languages, they will basically sell you whatever is the least commercially viable audience that they possibly can get away with.

Switching back into the Oxbridge Note Analytics account now, I’m going to look at a related report, the language report.

This is found under Audience > Geo > Language, right next to Location, and as you'd expect, this tells you what percentage of users speak or have their browsers set to a particular language.

And if I scroll down here I see en-us is the most, and en-gb is the second highest amount, then unspecified English, then Australian English, and then I think this is some Chinese variant or whatever. China and Taiwan, I’d guess.

And this sort of information can inform you as to whether it's worth translating your website.

In my case, probably not. But for other websites, there may be a compelling case for creating content in that language.

Let’s look at the actual English speaking countries sending traffic my way. And the United Kingdom has more than 5x as much traffic as the United States, even though United States - browsers advertising United States English - made up a large portion of my traffic. So don't put too much stock in the region in the language. I think, even though I'm Irish English, which is close to UK English, I set my computer to American English and in fact I even spell that way these days because of internet.

While we're in here, let's also look at the relationship between location and the value per visit.

So I'm going to scroll up here and click on Ecommerce. And here we go, and scroll across and find the per session value. So this is telling me that people from the United Kingdom spend on average of 19 cents on my website, whereas the United States, people from there only spend 7 cent. My content is largely geared towards the UK so it kind of makes sense.

Australia, 8 cents, India, less than 1 cent. This sort of ties into what I was saying earlier about there not being a high commercial value to that audience. Malaysia 1 cent. Hong Kong 16 cents - this is surprising. Yeah, this might indicate that that's a very very good market to pay attention to.

These days, many of your users will visit your computer on mobiles and tablets, as well as on desktop.

And having some insight into what percentage of users are on each of these categories of devices is useful, because you can decide how much to invest in making your website responsive and, more importantly, from a marketing perspective, you also know how much relatively to bid for each device.

So I'm going to look at this report here. It's, I scroll up, it's the devices’ report, so I go to Audience > Mobile > Overview, sorry the mobile report.

And I’ll scroll down here, we see that the Desktop category accounts for 72% of my traffic. Bear in mind, I've got a slightly old time period in use. I think it's increased since. Mobile 23%, and tablet 4%.

Now that information on its own isn't that useful. What's critically important - and I keep emphasizing that in these videos - is to connect this to ecommerce data so you can actually get some business sense out of these figures.

And if I go over here, we have the Per Session Value.

Of course, it might be possible that some people encounter my website first on their mobile phone, and then they pull out their laptop to actually make the purchase.

But based on this information alone, it looks like a desktop user is worth three times as much, and therefore I should bid that much more on that kind of traffic, when given that option on an online advertising platform, and they always give you that option.

This next report is browser and operating systems. You can find it under Audience > Technology > Browser & OS.

The value in this report, in my opinion, comes from detecting when there is a large difference in conversion rate or whatever, whenever the user is on some particular technology, for example using a particular browser.

This can indicate that your front-end is not rendering correctly there. Maybe some JavaScript features aren’t supported, or maybe the CSS has some special quirks in that browser and your design falls apart. And this can manifest itself as lower conversion rates.

And with that in mind though, the data of what web browser people are using is also correlated perhaps with their income and so on. I would assume that people using Safari are probably in a higher income bracket because Macs are expensive.

Anyway, if I scroll down here, I also select Ecommerce - I always like that one better than the defaults. These, by the way, show my custom goals. I’ll go into that later.

And so here we see that Chrome makes up 52% of my sessions, and then Safari -that's quite a lot- then Internet Explorer, which I specifically don't support, even though maybe I should but it's just such a pain in the ass.

If I go across here, then we see that Internet Explorer's per session value is 8 cent. Whereas Safari is 15 cent, and Chrome is 12 cent.

In fact, if we go down here we see Opera Mini, despite having 3% of my traffic, I had zero transactions, as did UC Browser. All of this indicates that much more strongly than with Internet Explorer, that there could be a real rendering problem in this case. Yeah, that could warrant further investigation.