Using my own business's data, I'll demo 3 actionable Google Analytics reports. First I'll use the Site Content/All Pages report to check whether my site's visual redesign improved the bottom line. Next we use the Audience/Demographics report to determine whether to advertise the college notes I sell to people over 35 (and whether to emphasize messaging that appeals to women or men). Following that, you'll learn why it's important to make business decisions using customer lifetime value instead of session revenue values (and how the Audience/Lifetime Value report assists you with this). 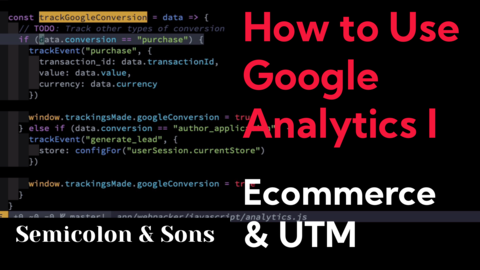 How To Use Google Analytics I: Ecommerce & UTM 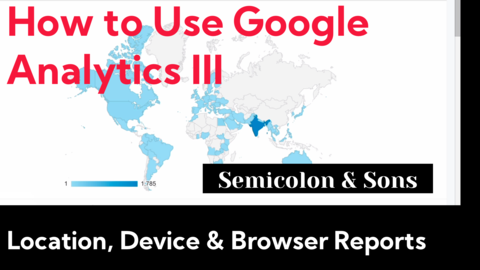 And based on that figure, how does that affect how much you're willing to pay to acquire a new user to your website for the first time?

Have you ever done a large redesign on your website then wondered whether or not it was worthwhile?

Did the design lead to increased conversion rates, increased values per user, that kind of thing?

So, in order to answer that question, I'm going to look at the report under Behavior > Site Content > All Pages.

What this report does is, for every single page in your website, give the major figures, for example, Pageviews, and Exit rate, Page Value and so on.

Page Value is the most important one, if we hover over here, this is basically the average transaction value, as well as goal value but we won't really go into that right now.

So let's compare this three-month period to the same three-month period in the previous year. So I'm going to select that here and click "apply" and wait for Google Analytics to update the data. And what we see here are two different graphs.

We get some more specific average figures here, this is the average for all pages in the website.

So my page views decreased in 2018, I think my SEO took a hit with a change in the PageRank.

However, my page value increased by 40%. Google calculates this automatically and gives you a green or red arrow depending on the direction of the results.

And let's say that you only redesigned certain pages on your website, then you could compare the results for each of those pages.

Let's imagine I only redesigned the law taxon page here, then we can see that this had an 81% improvement, whereas another page, maybe the home page was less effective after the redesign. This one is down 12%.

I sell college notes, and in particular I sell them to people in the UK. So, because people go to college there relatively young, I would assume that the vast majority of my customers are 18 to 24.

And based on that assumption, I might ignore marketing to people who are, let's say 35 and over, because what would be the point, at least based on my assumptions.

The Google Analytics demographics age report, which can be found under Audience > Demographics > Age, is useful to test those assumptions.

So what it does is break down the number of users by age.

One thing you'll notice here is that it has far less than the total number of users. I'm only getting 13% of all my users during that time period here because Google does not have data for everyone else. But still 13% of the data is a lot better than none of the data.

So, by default, this is sorted by the amount of users, and let's check out the numbers to see if they fit my assumptions.

And this might lead me to modify my targeting options in online advertising platforms, because they let you choose what age people you want to message, for example in Facebook - or rather who you want to advertise to.

And then the rest of the group to account for perhaps 15% in total. Let's think a little bit more deeply about this.

Should I exclude people who are over the age of 34 from my online advertising campaigns?

Well, let's look at the data.

What really matters isn't the number of users, what matters is whether they convert or not. And with a platform like Google AdWords, I'm already going to be filtering for people who are interested in law notes because that's the Google search they would have typed in.

So in order to answer that question I'm going to go over to the "per-session value". And this gives me a figure for how much money I earned on each of those users (or sessions rather).

This is slightly different to the figures you saw earlier because it also includes something called a "goal value", which you can assign, for example if someone signs up to your mailing lis. You might ascribe that a goal value of 1 euro, and then that will be tallied up here. I don't think I use that feature at all in my analytics so this is just revenue data. So I'm going to order by that. And the highest is 48 cents which corresponds to the 45 to 54 age group. This is something like 50% higher than my average 32 cents.

What this is telling me is that the older demographic tend to be bigger spenders. It sort of makes sense because these people have higher disposable incomes. And in fact my least profitable per session group are the 18 to 24 age people.

That's a very interesting finding thanks to the Google Analytics age report.

In marketing and advertising generally, they say that you want to use imagery that reminds whoever is seeing that imagery of themselves.

This means, for example, when you're targeting a certain demographic and gender, the imagery should reflect that demographic.

I would assume because I'm targeting a university audience, that it's roughly 50/50 with slightly more females. I think they tend to be better educated in the UK than males.

So let's have a look at the data and see if my assumptions are bourne out.

And here we see female is 63% and male is 36%. It's significantly more female than I would have expected, I would have thought it to be slightly in favor - that's rather almost two thirds.

This sortof indicates that I should be having two pictures of female to every male, or otherwise try to appeal to the female market with my branding and imagery and so on.

Let's look at another dimension here. Do men or women spend more money on average?

Wow! This is really significant.

I have no idea what causes that, but as an advertiser this might indicate to you that targeting males with your online advertising may lead to more sales.

An extremely important concept, when running any sort of business especially an online business is Customer Lifetime Value.

The reason why this is important is because if the user initially only spends a certain amount on your website, say, 20 euro, or something like that, then you might think a customer is only worth that much to you and never bid more in online advertising in order to gain that customer the first time.

However, if they end up buying from you two or three times more in the future, their actual value might be 60 euro. Therefore it makes sense to bid, more than the total value of that first transaction, i.e. 20 or a bit more than that, in order to gain that customer because they'll buy multiple times from you in future.

This Google Analytics report Lifetime Value is intended to capture this concept.

So, if you look over here...by the way you find this under Audience > Lifetime Value...it's beta.

Unfortunately it's limited to only 90 days after acquisition, so this doesn't really do my business justice, because people tend to buy for up to three years after first doing business with me.

And my customer lifetime value is something like 4x, uh the first purchase or maybe it's 3x but it's quite significantly more. But this is reflected somewhat here.

So on day zero each user is worth 8 cents to me. (Yeah, it’s user. I was going to check if that's per session but that wouldn’t really make sense here. )

So each one is worth 8 cents, but on day 90 or whatever they have here, day 89, they're worth 14 cents which is nearly twice as much. Which is really interesting information.

And they also have some figures broken down by their channels there.