The Google Ads Keywords reports helps you in your quest to find a paid marketing campaign that sustainably brings in profitable trafic. I introduce the critical ROAS metric (Return On Advertising Spend), which gets calculated on every keyword you advertise with on AdWords. Many websites see far higher revenue earning potential at certain times of the day. If you understand your site's patterns, you can selectively bid more or less at those times and optimize your spend on AdWords etc. - this is where the Time of Day report comes in handy. Lastly, the Treemaps report is a great way to understand your data in a vivid, visual way. You can use this to plan out better paid marketing strategies and also to learn which of your pieces of content is the most engaging (and should therefore be brought to the forefront). 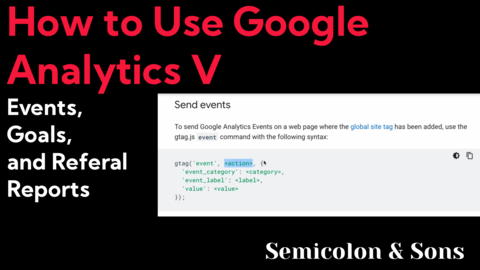 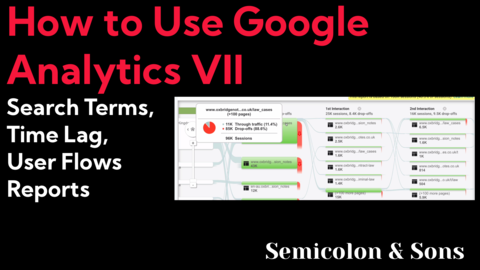 Today is not so much about Google Analytics but frugal Analytics.

We’re going to connect Google Analytics to Google AdWords and find a way to turn our poorly performing ad turds into profitable Adwords.

I would say that it's every internet marketer's dream to find some sort of direct marketing campaign, for example, Google AdWords, that is profitable. One where you spend one buck in order to get a click, and then you make two bucks from that click. Two bucks of profit or one buck of profit. Doesn't really matter, as long as it's more than you spend when you consider all your costs and so on.

An extremely useful report in getting to that stage is the Google Ads keywords report. You can find that under Acquisition > Google Ads > Keywords.

Now you don't start off with data here, even if you have a Google AdWords campaign. You have to go over to your settings in Google Analytics, and then link it to Google Ads.

Once you've got data coming into Google Analytics from Google AdWords, the next thing to do within this report is to scroll over to the Clicks tab and explore and click on that.

This isn't available normally. Normally you just have these ones, or sometimes just one or two, but this is added on for anything that's connected to Google Ads.

The effect of this Clicks tab or whatever you want to call it, is that a couple of new columns up here, or a bunch of new columns, here we get clicks as you'd expect, and that's the number of clicks total for each of these keywords here.

That's why it's called a keywords report. So law uk notes, gets 722 clicks or 13% of the total. That's a really important keyword for me, then lpc notes gets 10%, law oxford notes, 8%, and so on and so forth.

Then we get Cost. How much money was I spending in Google AdWords? Exactly how much in total to get all those clicks?

And then we get the click through rate CTR. It's the percentage of ad impressions that resulted in clicks.

This happens within the Google platform, and there's a big difference between these different keywords. Law oxford performed very well with 9.21%, whereas law uk revision got 0.7%.

The next column we get here is the cost per click CPC.

How much do I pay for that particular click on Google AdWords? That information isn't that good on its own. Where it gets really interesting is these last two. This is RPC - Revenue Per Click.

And what this essentially does is figure out how much revenue I'm earning on each of those clicks.

And this is useful information on its own because as long as RPC is over CPC then, as a rule of thumb, it's profitable.

But this is calculated for you in a very nice way here with ROAS, which is Return On Advertising Spend.

So what this essentially says, it's a percentage, so 163% here means that I'm making 1.6 times what I spend in advertising in revenue.

Some of these are negative, which means I probably shouldn't be advertising on them, at least taken on face value. If you consider customer lifetime value, maybe some of these are in fact profitable.

There are many many ways to take action on this particular data.

For example, if we look at this row here,law oxford notes, I'm getting... how many clicks? 468 in this time period, and it has a really healthy return on advertising spend (ROAS).

So it may be possible if I were to check in Google AdWords, that I could get maybe twice as many clicks, if I were to increase my advertising budget there, and I should look into that because this is a really profitable keyword for me.

Another way to take action on this sort of data might be to do a filter. I'm going to filter for ones where my ROAS is zero, where I'm not making any money whatsoever.

And then also where I'm getting, you know, a certain minimum number of clicks. I don't want something where there's only one click. That doesn't really tell you much, because of the law of large numbers and all that kind of thing.

So, I'm going to go to Clicks and I'm going to say Greater than, let’s say, 30 in this time period. Let’s apply that and see what happens.

All right. So here are all the keywords, where I'm, you know, spending money getting clicks and I got zero sales out.

So in total in this time period I spent 130 euros on all these keywords and netted zero sales.

This might be an indicator that I should go over to Google AdWords and just cull all these keywords. Or at the very least, I should think about how to perhaps restructure my website and send traffic from those ads to a different part of my website, in order to better convert that traffic.

Many online advertising platforms let you choose some time of the day to advertise and you can, for example, switch off your ads at a certain time of the day or you can set your bids to be higher in the morning or in the evening.

If you want some solid data on what you should actually be doing in that situation, you want to look at this particular report, the Google Ads Hour of Day report.

You can find that under Acquisition > Google Ads, no surprise there, and > Hour of Day.

The next thing I'm going to do here is click on Ecommerce, and then I'm going to choose Per Session Value here.

It starts off with just the number of users. And what this does is produce a graph like this and you can see that on the x axis, there are different times of the day, and on the y axis, there is the Per Session Value. How much money was each of those sessions worth?

So if you compare those two, you'll see that this is worth nearly 4 times as much as these sessions. To be safe, you might say it's worth double as much when you average out over all these time points.

The smart way for me to use that kind of data is to go into my Google Ads campaign and then reduce my bids during the wee hours of the night, and maybe increase my bids by the same amount during the afternoon when my customers tend to buy stuff.

The next report, I want to show you is quite a weird one but very useful due to its visual nature.

This is the Treemaps report. You can find it under Acquisition > All Traffic > Treemaps.

So I'm going to dig a little bit deeper into the data in order to tell a better story with the data that’ll make this particular report clear to you.

So I'm interested in Paid Search, so I'm going to scroll down here and click into Paid Search and give that a second to load and while I'm in there I'm going to choose Source.

So, let me set the context here a bit.

Over the past couple of weeks or whatever, I did some online advertising on various different social media platforms for Semicolon and Sons in order to see, you know, where I can find new people who would be interested in watching those videos.

And you can see the relative number of users from each platform here that Reddit was the largest. Twitter was almost as large. Facebook was much smaller. And Google was tiny.

What's interesting here is the secondary metric, that's the Goal Conversion Rate. In my case that's just watching videos or signing up for the email subscriber list or whatever.

Yet, I was sending nearly eight times as much traffic from these platforms as from Facebook.

So, this particular report gives me the insight that I should be focusing a lot more on Facebook perhaps. So I'm getting a 27% conversion rate there, that's very good, versus 8% and 5% here.

I’m going to demonstrate another use of Treemaps here by scrolling down and going just to Direct traffic.

Now, while I'm in here, you can see each of these rectangles corresponds to a different sort of page on my website. For example, this one is the episode 'how-to-make-less-mistakes-when-programming', here's the series 'Inside-the-Muse' and so on and so forth.

And I'm going to do a sub filter here, to just episode. And what this does is just show all the, just filter to all the episodes on my particular website.

Now I'm correlating each of these episodes to its Goal Conversion Rate. So you can see that most of my users are going to this particular episode 'how-to-make-less-mistakes', whereas episodes like 'integration-testing-best-practices' or 'IDE-like-refactors' have better conversion rates.

And I can use this data to figure out which particular episodes to highlight in my UI or to suggest people to watch next.

That's all I've got for today. See you next week.